The phrase creating a coaching culture is not a new one.  David Megginson and David Clutterbuck were publishing papers on this topic back in 2006, over 15 years ago.   Many forward-thinking organisations have been building their coaching cultures with good effect, but those companies are few and far between.

With the pandemic, new technology and the adoption of new ways of working, this may be an idea whose time has finally come.

What’s changed then?  The pandemic has clearly led people to think more about what is important for them and their lives.  That doesn’t mean they want to de-camp to Wales and set up a commune, maybe some do, but there is a detectable move towards more balance between career and home life.

With the move to hybrid working this is clearly becoming a practical reality enabling people to spend more time at home – doing that school drop off or pick up, supporting aged parents or just having a bit more time to pursue personal interests.  It means that command and control, long hours, daily commutes and presenteeism will be less a feature of working life.  People are also looking for employers to provide more individualised support whether it be for wellbeing, development or from their manager.

Technology and people’s comfort with it is changing too.  The growth in coaching platforms and the number of coaches who are qualifying has decreased the cost of coaching and made it accessible from the home or the workplace.  We had an innovative insurance client who offered a couple of coaching sessions to all their employees (over 100) and we were able to set this up quickly and people began booking their coaching immediately. You could not have done that in 2006!

What is a Coaching Culture?

All organisations have a unique culture which reflects their own development.  We know the culture of the British civil service will be different from a Silicon Valley tech start up.  However, here are a few characteristics of an organisation that are building a coaching culture:

In 2006, David Megginson and David Clutterbuck, undertook some research into Creating a Coaching Culture and identified four stages, the following is a summary:

What stage do you consider your organisation to be operating at?

How might Leadenhall partner with you to build a Coaching Culture?

Here at Leadenhall, we have been working with international clients for over 10 years helping them to find effective solutions to developing, implementing, and supporting their coaching and leadership development needs.  We are working with clients every day on leadership, team, and group and online coaching (via Coaching on Demand our proprietary platform).

We have seen that a one-off assignment here to solve a ‘problem’ or procuring licences for digital coaching doesn’t lead to the broader adoption of coaching skills or behaviours.   We believe in developing the right solution alongside you to ensure that it meets your needs and is embedded into your organisation.

Our solutions will help your organisation measurably benefit from installing a coaching culture and work with you to ensure its adoption such that it becomes part of the fabric of the organisation. 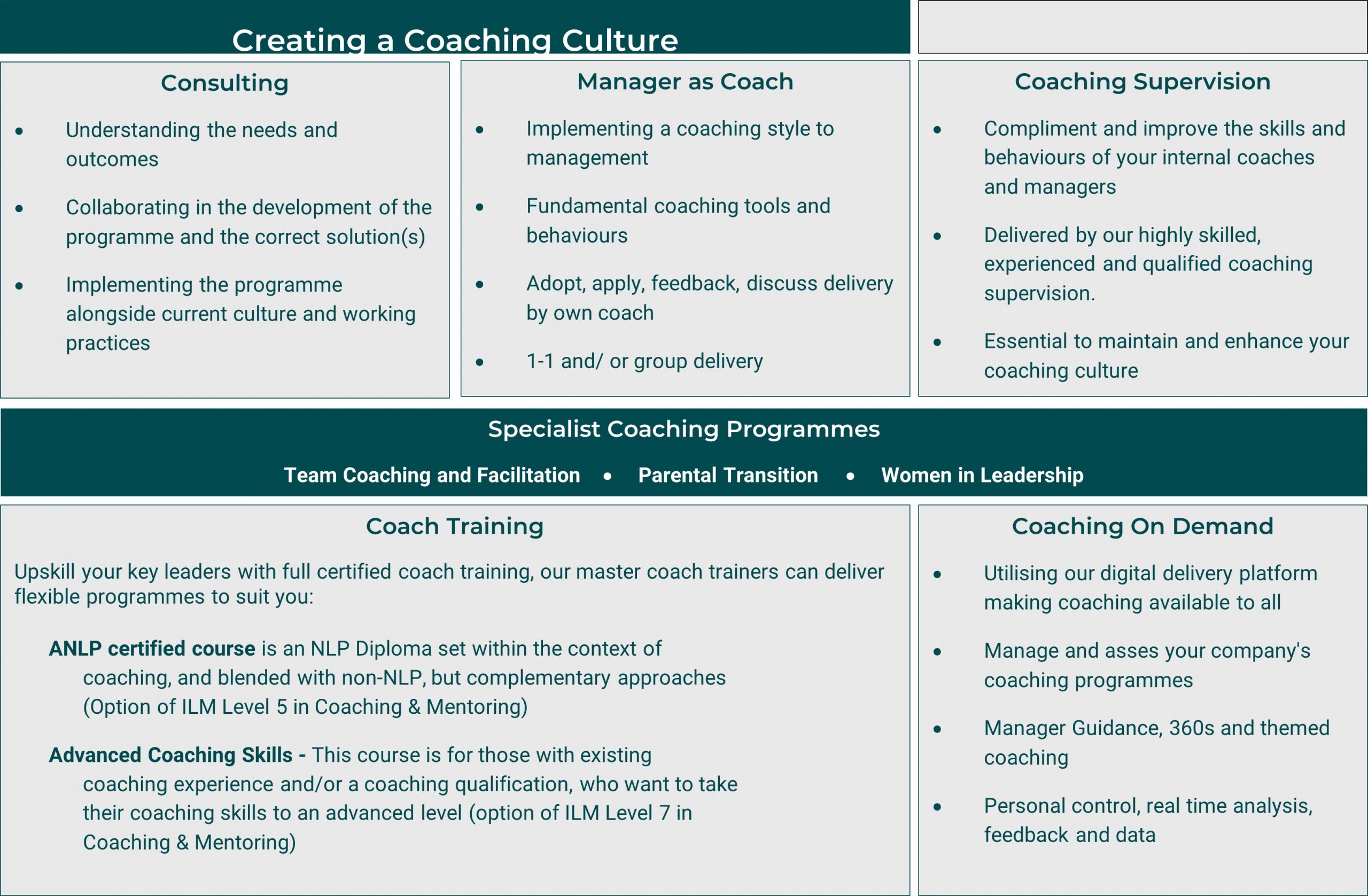 Contact us today to have a chat about installing a coaching culture in your organisation.